Kodai Nataka Vizha (Summer Drama Festival) of Kartik Fine Arts is ON in the city and it is wholesome entertainment and drama time for theater lovers. The festival is happening at Narada Gana sabha, Alwarpet from April 22nd to May 3rd. We witnessed the play by Gurukulam Original Boys 1995, Theedhum Nandrum by V.P.S.Sriraman on 1st May at 7 PM. The title is a popular adage, “Theedhum Nandrum Pirar Thara Vaaraa” –  We do not beget the good and the bad from others. In short, it conveys that everything is within us and the way we see and adapt ourselves leads us to good and bad in life. The concept of adjustment was so beautifully handled in the play that we could connect with it instantly.

A newly married couple run into issues and visit their aunt and uncle. The aunt takes the responsibility of making the daughter-in-law understand the importance of adjustment. In the process, the play gives a practical touch on today’s girls and their attitude towards the in-laws, appreciation is due to the writer in not taking it overboard and keeping it as natural as possible. The aunt creates a bigger complex situation that makes the daughter-in-law repent and in the process, understand the importance of adjustment which might give harder times initially but ensures happy years later. The dig on smart phones were humorous and gave way to laughter and thunderous applause from the audience. 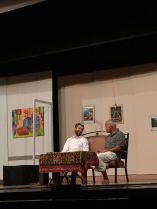 The purpose of the play or the plot was neatly structured with crisp dialogues, progressive storyline and exemplary acting by the lead pair, Viswanathan and Visalam aptly carried out by veteran actors Viswanathan Ramesh and Malathi Sampath. Viswanathan Ramesh’s timing, modulation and expressions gave the play a different dimension and was an invaluable addition to the storyline. 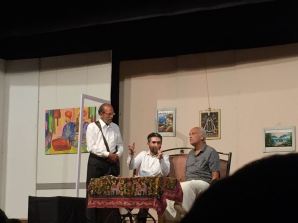 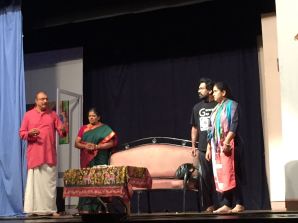 Special mention to the mother-in-law of Anu who delivered her dialogues without dramatics and superficial emotion and established earnestness in her purpose and carried that role well, though only in one scene, with ease.

The story was predictable but the way the subject was handled made up for it.  Kudos to the script, dialogues and direction by V.P.S.Sriraman for taking a simple and yet  powerful message and conveying it as an entertaining package which the audience could enjoy.

Set was kept to the minimal and served the purpose well. Music was not overpowering and did not intrude heavily during dialogues.

Scope of improvement – well, should something be always here in this section? 🙂

Overall it is 1 hour 45 minutes of sheer entertainment and we came out with something to think about and a well spent evening.