K. Vivekshankar‘s Prayatna with the continued quest for providing  Theatrical  Experience  instead of  mundane entertainment has embarked on  “BRAHMENDRAR” a  Spiritual Tamil Play, a befitting  divine Intervention for the  landmark 25th play  by  K.Vivekshankar on 24th and 25th February 2018 at Narada Gana Sabha, Alwarpet, Chennai.

The Playwright and Director has in all his plays displayed a penchant for painting the canvas of Tamil Stage with  lucidly  brilliant  thematic  content to enthrall the viewing audience  with more than a living experience on contemporary and historical subjects. The incredibly unique presentation style on stage has earned him accolades from all over in the last 2 decades.

DHANUSHKOTI is one of the most talked about plays even today for bringing on stage the real life experience of rain and deluge. NARENDRA, THODARUM, NADHIMOOLAM and SISTER NIVEDITA are Plays that have scaled the peak in all aspects like performance, content and narration of the story line in a seamless manner.

Prayatna has always served as a launch pad for budding and aspiring actors to exhibit their talent and acting skills on stage. Veterans and famous TV & Theatre Actors have combined effectively with the debutants contributing to Prayatna’s Success story as being one among the best Tamil Drama Troupes.

BRAHMENDRAR,  the  upcoming production will be a Magnum Opus on Stage capturing the Life of Sadasiva Brahmendrar who was a Mystic, Avadhoota , Brahma Gnani and Seer who at one stage even regarded his body as an impediment in the spiritual path and roamed around without robes as a recluse seeking the Ultimate Reality- Brahman .

Sadasiva Brahmendrar’s Life and his journey on the path of realization of the Brahman throws up innumerable experiences and situations with stunning miracles.

He lived in the 17th and 18th Century and has  in his life time composed Keerthanas  like PIBHARE RAMA RASAM , BROOGHI MUKUNDETHI, MANASA SANCHARARE which are soul stirring renditions of Bhakthi  Rasam for any connoisseur of Carnatic music.

Sri Sadasiva Brahmendrar’s  Lifetime is beset with experiences of 4 Maratha Kings , the King from the  lineage of the famous  Pudhukkottai Samasthanam apart from  experience of a  Mughal chieftain during that time, to quote a few.

Interestingly Sri Sadasiva Brahmendrar remained a Mouni ( Deliberately chosen path of muteness) and was in a  transcendental state , always  one with the Brahman but yet had a resounding impact on all those who were blessed enough to be with him.

The Play “BRAHMENDRAR” by K. Vivekshankar to be enacted on Stage by Prayatna will capture with authenticity this Brahma Gnani’s life time corroborating with history and related events of that time.

Music by SANKAR’s Sadhaga Paravaigal with the mellifluous divine Keerthanas set to music on stage combined with the sets and backdrop by Mohan Babu is bound to take the audience to a transformational spiritual experience from the terrestrial to the transcendental.

Do not miss the following dates for this Theatrical Experience into the 17th and 18th century.

The show is on

A sneak peek into the intense Rehearsal sessions as the team prepares for the show. 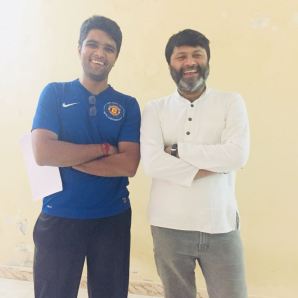 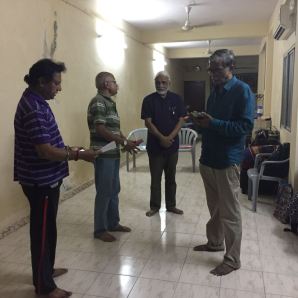