Music season, December music festival or Margazhi Utsavam as its fondly called is a season of celebration of music in Chennai. All sabhas run their itinerary one after the other or parallel to give in the feast of music and dance not only to Chennai people but for people who make it a point to visit here during this time hailing from different parts of India and abroad. Sabha hopping is one of the activity so dearly associated with this phenomenon which means moving from one sabha to another to attend different concerts.

Great levels of planning are undertaken to balance kutcheris (concerts) at sabhas and not to miss out the lecture demos by experts scheduled early in the morning by Sri Parthasarathy Swami Sabha. I know people who leave home as early as 5 AM to attend these lecture demos that provide insights into many aspects of music.  This season sees dailies covering performances of the previous day and ready reckoner of concerts arranged date wise, sabha wise, and  performer wise and it is distributed free of cost by a music lover. 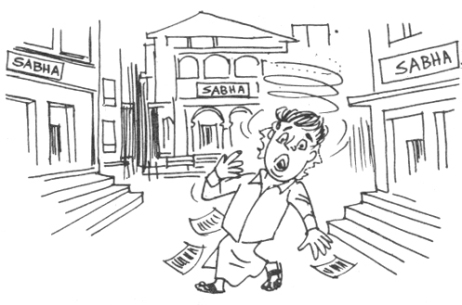 For those learning or interested in knowing the ragas, there is a small book with songs and their ragas and it is likely that you are sitting next to one who has it in his/her hand. And a post on the season does not end without a reference to #Vumboids, having a go on gossips. Very interesting conversations emerge and if you wonder where there is time or place to do these chit chats, here comes the grand introduction to the popup canteens set up during the season in the concert halls.

The canteens are set up by notable catering contractors whose cooking can be seen only in huge weddings, Gnambika, Mountbatten, Meenambika and the list goes on. Many discussions on the concerts and more on the saree, accessories make rounds here.  On the same note, it is amazing to hear the expert comments that flows out of these people, worthy to be featured in any media.

Now to the season this year, Chennai rains had major impact with few senior artiste keeping off the circuit this year, prominent being Sudha Raghunathan, Bombay Jayashri, T.M.Krishna, Vijay Siva and Dr.K.J.Yesudas.  Chennai rains and many talks on future rains had its impact and people travelling to Chennai for the season was comparatively less. It would not be overreaching to say that this season took off slow and though it picked up later, it was lack luster this time.

Narada Gana Sabha had Gnambika  Caterers and we made it to check out what they had in offer. 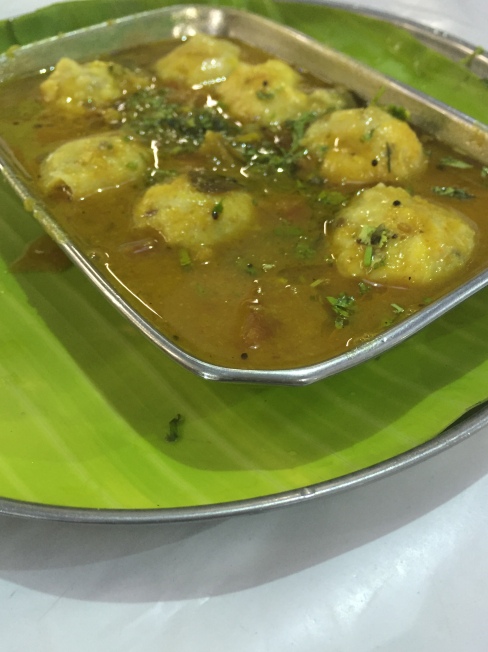 Gobi 65 was an attempt to refresh the menu  but it turned out to be soft pakodas. Kuzhi Paniyaram, my favorite,was there in the menu. It was one of the best I had that evening, full credits to the Ginger Chutney given with it. A welcome addition to the main, it was refreshingly unique and with that mild tanginess, made the dish special. 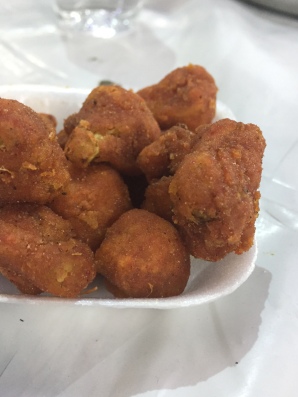 Never had such a tasty Kasi Halwa before. It was well balanced in sweetness and given in a quantity that we do not feel it is too much but enough to relish. 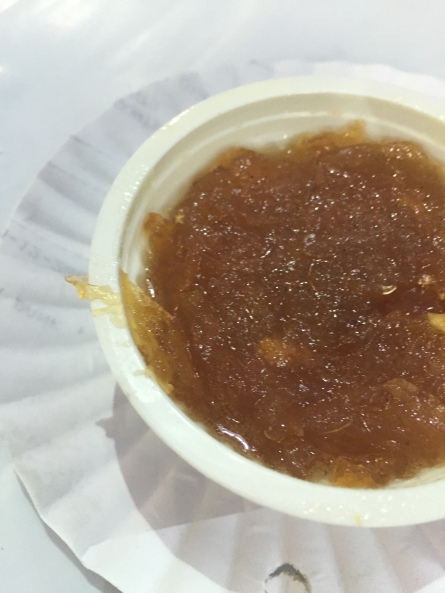 There were days when we would look forward to visiting these canteens for that authentic food but our experience in the last two seasons made us feel that there is nothing extraordinary to make an effort to visit them. Probably the younger generation who have taken over the catering business is unable to retain the traditional touch to the food and hence unable to captivate us.

The other factor is the prohibitive price list, one being by Mount Batten Mani in the Sri Parthasarathy Swami Sabha programs at Vidya Bharathi Kalyana Mandapam, Mylapore.  Two bonda plates and a coffee cost Rs. 250+ and a plate of Idli costs Rs.100. Meals were priced at Rs.275 per person.  Meals served stood for its taste and had an authentic touch but we are not sure if this price is justifiable.