Chennai Rains – Close Encounter with Disaster That Was Waiting to Happen

Living in the heart of Chennai, it has taken this long for me to write a post on Rains that ravaged us and the beautiful emergence of Chennai for Chennai. It has been a turbulent and difficult time and writing about it brings in a bit of wetness at the corner of my eyes. I can attribute it most to the never before seen beautiful hearts who braved the floods to help those in need. Not that they were safe but still extending the hand to catch those in much deeper waters than them and in the process we lost few brave hearts too, irreparable loss to the community on the whole.

In this case, it was not only people who were economically backward but everyone got affected in one way or the other.  To many, this rains meant a lot more than just water everywhere. To people who believed in making a living with dignity and stupor with a monthly salary, this rains meant washing away of many of their hard earned carefully bought appliances, sofas, beds, televisions, refrigerators, in short their earnings and more. These people could not bring themselves to highlight their loss or seek help but silently crying and wondering how to rebuild their lives from scratch. We personally had many such experiences from our family, friends, relatives and acquaintances. Yes, Chennai rose to help Chennai and positive vibes ruled more than the disaster but yet we cannot bypass the fact that many of us had a life threatening experience with loss of families, bread winners further extending to money and property. The term ‘rains’ has a psychological impact on many of us today and psychiatric counseling is underway for those affected to make them believe life is livable. Now here is our account of our personal experience with rains.

We are active in Twitter and it all started there. Flooded with tweets asking for help on the situation and availability of boats, we tried our best to connect to the concerned and provide information. It was not easy, many volunteers came up later but the initial immediate response had RJ Balaji and Actor Siddharth doing their best. We do not mean to glorify people unnecessarily neither do we have any links with both of them but we strongly believe that sincere efforts should not go unnoticed. We saw small hands, big hands extending to those in need, doing whatever they could within their means. #ChennaiFloods was a national disaster and it is very difficult to imagine what kind of help was required and sadly, it is us who were affected, had to rise to help others who were in deep waters. We want to recognize and appreciate those nameless people who extended every wee bit of help in those hours of need. This includes the Army, Navy, Air Force and the National Disaster Relief Force who had put their lives behind to get into those waters to save people with their tireless efforts.

We had to stop any coordination as power and mobile connectivity went down. We had all helpline numbers in hand but were not in a position to reach any to pass on or get help ourselves. Initially we had no water logging but we were faced with a huge stream of water gushing out from IIT Madras. Their walls are weak and as the water rises, there was every possibility of a wall collapse leading to a deluge. So people in the area had no option but to make holes in the wall to let out the water. The water level of the street river was rising and we could see it reaching our door steps. The gushing stream opened up pot holes on the main road and we saw people slipping and stumbling. We tried putting a pole and tree branches to alert but since the water was flowing, everything got dislodged. Our community people got together and took turns to stand near it and warn people driving and walking this way. Even at 12 midnight, we were there to guide people in knee deep water. It was so shocking that an institution such as IIT Madras could not find a way to channelize its water through proper waterways and was indirectly forcing people to let it out on the roads. Soon water from IIT came out from different ways and we stood as an island cut off at all sides. We kept a watch all the time on the water streaming out fearful that it might suddenly rise and get into our homes. We also had fear of the wall collapsing which would mean that we will be submerged in water. With no way to contact anyone, we lived for 4 days believing in each other and helping in whichever way we could. 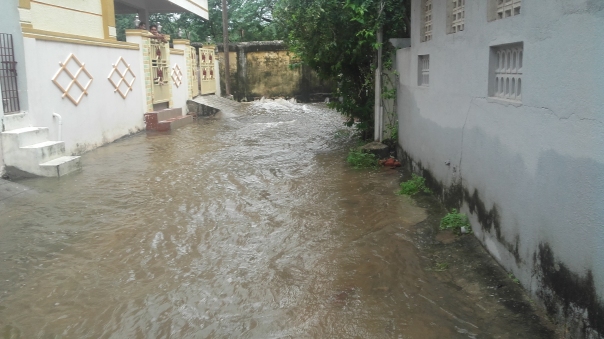 Water gushing from the IIT campus and streaming into the street

Rains stopped but there was no end to the water streaming out of IIT. It was clamoring for essentials such as milk, drinking water and shops nearby who did manage to open were empty in no time. No power and No ATM and everything we could buy came only with cash, not exorbitant but at a higher price. So we pooled out whatever cash we could to sustain, cut off in communication, we had no idea what was happening. Rumours ran high and many families who had come in to make a living walked out bag n baggage to their home towns and for working from another place as the corporate they were working with assigned them.

When power was restored, we understood the state our city was in and after 4 days of no power, it was a different world we saw in Chennai. As we gathered to take a stock of things as it stood, to our utter shock we saw so many stiff frogs floating in water. It dawned on us that they were electrocuted. The stream of water gushing out brought out lot of boys interested in fishing and our area was full of them competing with each other for the best catch. We had a tough time advising them to keep out of water taking turns to warn them of the impending danger and made efforts to clear water from and near the EB box.

Water from IIT reduced and we had heavy stagnation on the roads stinking and we took it upon us to clear the water, debris and also put in Bleaching powder to ensure we do not get into health related complications.

We used both online and offline communication to help out in whatever way we can but our efforts in keeping our area and our people safe turned out to be our most demanding priority. Charity begins at home. We know the job is not done yet and it has a long way to go. Our attitude and willingness to go that extra mile made us believe that when the going gets tough, the tough gets going.