McCain Made My Life Lot Easy

Okay, let us be honest. McCain products are ready to be deep fried food items available in freezers in most of the super markets. Deep fried? Yes. So what? I am getting allergic to the fact that the moment ‘deep fried’ is mentioned I can hear the awws and ohhhs and question marks over the eligibility of the item to be consumed. Let us get this straight. We are consuming deep fried food as part of meals, when we eat out, and also when we socialize in various forms. Ask nutritionists and they will tell you fat is not totally bad. It is the temptation to eat more which creates trouble. Now with so many options for healthy deep frying with olive oil and various reports about the goodness of gingelly oil, groundnut oil, indulgence once in a while is not a crime. This is for the kids and people without diseases that abhor deep fried goodness.

Coming to the topic, our world is travelling in a circle, and we at some point of time come back to the same point to travel the same again. We grew up eating appalams (papads), vada, bajji, bonda, pakoda all deep fried and we never ever got reprimanded for eating one extra piece here and there. It is simple. Going to hotels was a rarity and eating out meant participating in functions of relatives or when on a vacation maybe once a year. So in a nutshell, we never ate out and we knew what we were eating. So the food was naturally balanced as we lived on budgets with rations planned for the month. No way could we get that extra we are so worried about now. To be honest, we never knew the term Nutrition and Balanced Diet and its significance in daily life until we came into late 20s. Our exposure to Iron, Vitamins, Calcium were from our science book. Never did we relate it to our daily life.

Coming from this background, I was never hesitant to give those deep fried foods once in a while to my kid in the form of traditional food. Everything changes and naturally this aspect can never be left behind. My daughter started finding this food boring and was enamored by the food stuff brought and talked about by her classmates. Her bickering grew louder and sharper and so with no way to tell her outside food is unhealthy, I relented and allowed her to eat out. The first time she had no problems but the second time she developed food poisoning and had to be treated for 3 days to get back to normalcy. My talk and advice on eating out had some impact due to the pain and suffering she faced for a month. Again she started asking for those finger chips and the likes.

I was desperately looking at a solution and normally I never go by the frozen food section in my super market because I am a vegetarian. When I casually glanced at it, I saw a cover with Finger chips written on it. I enquired with the sales girl and she told me it was ready to cook snacks. I took a packet home and based on the instruction, tried it out. It came out so nice that I became popular with her friends as ‘Snack Aunty’. With the confidence, I got with the product, I checked out the brand name and it was McCain and also chased its various products across supermarkets; I tried out Cheese corn nuggets, vegetable nuggets, cheese balls, chili garlic potato bites, potato wedges and many more. My daughter’s favorite is chili garlic potato bites and French fries. 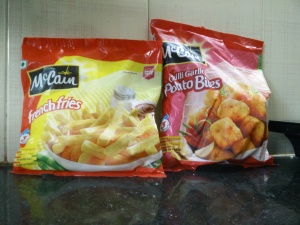 With a little pang of guilt of serving deep fried food for my daughter, courtesy my friends; I started adding interesting homemade accompaniments to it. I even traded an apple before the French fries and a carrot salad after the potato bites as a deal. We started seeing McCain products in fast food joints and the real appreciation came when she and few of her friends after a birthday bash in the joint came and told me that my preparation was much tastier than what they had in the joint. Their smile said it all and I smiled knowing that I have put a smile on her face which makes the world look so beautiful. Thanks McCain. 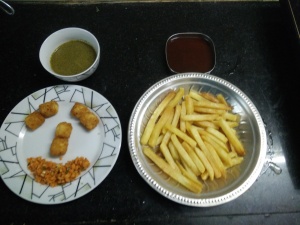 Here are my preparations on a rainy day –

Few Tips to get it right 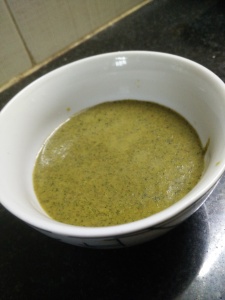