Ek Nayi League, Our own Kapil Dev’s Launch – What Can IT Be? 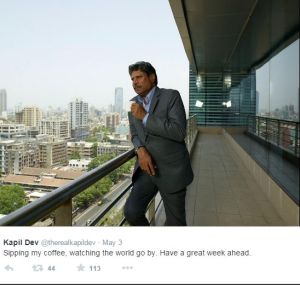 Ek Nayi League, this is the biggest topic for Indians today. Why? Because Kapil Dev is launching it. Where? In Mumbai. When? 7th May 2015. The topic for this blog post is what could this Ek Nayi League be? We saw number of videos in which Kapil Dev invites celebrities such as Dhoni and Sania Mirza to come and get involved in the Nayi League. He also adds that if this Nayi League is played with heart, they are sure to lose it. While addressing Dhoni, Kapil Dev appreciates his effort in bringing up the Indian team putting in all his heart and soul and also reiterates that there is no retirement for stars like Dhoni. On his twitter account, he adds that Sania Mirza, Manoj Vajpayee, Kapil Sharma can also be involved in his nayi league.

What could his Nayi League be? As he keeps reiterating on ‘not to play with the heart’, it makes us think it may be something to do with the head. There are certain areas where head rules the heart and one of the main areas is a Game show. A Game show is a great area for a sports celebrity such as Kapil Dev to launch.  Since he asks for the celebrities to come and get involved, it might be a celebrity game show. But then, as we are focusing more on it, the video where he talks about Dhoni comes to mind. He is asking Dhoni not to retire and it gives us an idea that it may be more of a long term proposition and the word ‘involvement’ may not apply to this aspect. So we rule the game show out.

The next area that comes to our mind when we talk about the head ruling the heart is Chess. Maybe Kapil is launching a Chess league. Not a wild thought, given the fact India keeps producing immense talents in Chess, not to forget mentioning about our Great Vishwanathan Anand. But the question remains. How would the celebrities such as Dhoni, Sania Mirza, Yuvraj Singh would involve in it?  We suppose Chess is also not in the league.

We are sure the new league has to be something to do with Sports else Kapil Dev will not be a part of it. Kapil Dev is a patriot and hence it may be certainly something to do in the interest of the nation. We just saw a tweet where he says he just met our Indian Prime minister Narendra Modi. Scanning the various areas Kapil Dev may be a part of, and trying to put his shoes on, we struck upon another idea. It may be a big league, a Sports Academy or University to teach various kinds of sports to students. India still lacks a proper university for sports to teach and train professional sports persons to compete in the international arena. Who could be best suited to be involved in this area that requires concentration, dedication and professionalism than our own Kapil Dev, Dhoni, Sania Mirza, Yuvraj Singh and our league of sports personalities? This idea seems to work given the inputs and even if this guess is not right, we would still recommend that Kapil Dev should take up this cause.

Now it is for Kapil Dev to let us know what his Nayi League is all about. We are all waiting with crossed fingers.

Posted on May 6, 2015, in Editors Corner and tagged Cricket, ek nayi league, kapil dev. Bookmark the permalink. Leave a comment.