Nadhimoolam Play Review by The Hindu

We are happy to support this effort to keep Tamil Theatre in the pages of The Hindu and the New Indian Express. 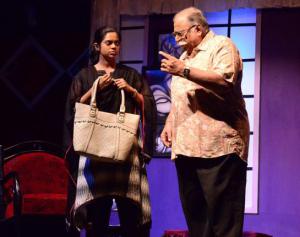 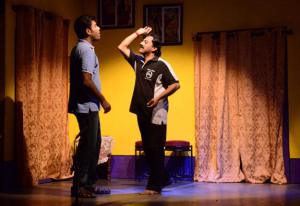 ‘Nadhimoolam’ portrayed the agony of the protagonist.

A clear conscience is a soft pillow. Our conscience can make our lives miserable, by reminding us of our mistakes. The still small voice does not rest until atonement has been made. In the case of some, atonement isn’t enough. The guilt feeling drives them to actively seek death, for this is the only way they can be released from the nagging of their conscience.

Gopi (Girish) is a man, whose past haunts him so much, that reparation for past mistakes isn’t enough for him. He wants to end the torment by seeking death at the hands of those he has wronged. In Prayatna’s play ‘Nadhimoolam’ (story, dialogue, direction K. Vivekshankar), Gopi’s conscience appears to be the protagonist. The play takes…

Posted on February 26, 2015, in Attractions. Bookmark the permalink. Leave a comment.