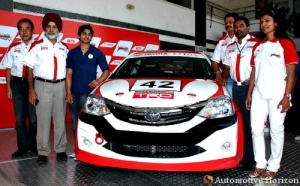 Toyota Kirloskar Motor (TKM) today unveiled the concept cars of its Etios Motor Racing (EMR) Series along with exciting motorsport activities at Lanson Toyota and Harsha Toyota in Chennai.This new venture is in line with its global philosophy of introducing ‘WAKU DOKI’, which in Japanese means ‘excitement, joy and fun.’

Apart from the EMR concept cars on display, there was a host of motorsport based activities for all age groups visiting the dealership. Racing simulators and remote controlled cars on race tracks were installed to enthrall motorsport enthusiasts. Children who accompanied their parents were given a crash course in basic automobile technology in a zone called the ‘Children’s Automotive Learning Area’, apart from other relevant contests and activities. This year will be dedicated to popularizing the EMR brand, apart from the dealership activations in 14 cities and 24 dealerships, there will be exhibition races, roadshows and a whole lot of activities lined up before the actual races next year.

The Etios racing platform will help talented young racers develop their skills, and further train them to gain a competitive edge for their future in motorsports. They will be mentored by experts in the field, and will be given an opportunity to compete among the best in the country. This series will not only highlight the technological prowess of the manufacturer, but also the endurance levels of the Etios and the ‘fun to drive’ aspect of the vehicle.

Online applications were open for over a month and the response was a record number, 3,303 registrations. What is more, rigorous EMR camps will be conducted in four cities such as Pune, Delhi, Kolkata and Bangalore in March and April, 2012 to arrive at the final driver line-up. Furthermore, the selected applicants in the first two camps will go through go-kart selection rounds, and then those selected for the third camp will drive the Etios Motor Racing cars along with in-depth lectures as part of the training process. All the training will be conducted by professional drivers and instructors from Toyota and local racing experts. The study material will be a combination of what is used in Japan and required by FMSCI to ensure the drivers are trained to international standards.