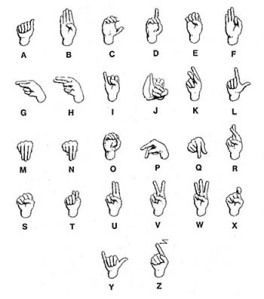 Sign Languages are complete languages. Sign Languages all over the world have complex and difficult grammatical structures that need to be learnt. Incorrect use of the Sign Language grammar results in incomplete or distorted communication that fails in its essence of conveying a message. Every concept in Sign Language can be interpreted in the spoken / written language of any country and vice-versa.

Hands are the most important part of the human anatomy that are used and noticed in Sign language communication. Facial expressions and Body Language play a vital role as well.

Imagine someone taking to you in a monotone. The conversation turns out to be boring and you would loose interest in the conversation. Due to the constant change in the tone during a conversation, the discussion may be exciting & interesting. Similarly in Sign language, the Body Language and Facial Expressions act as the tone of the communicator. The subject being discussed in Sign language would be boring if it was void of any expressions and body language. Body language and facial expressions also make an integral part of Sign Language grammar.

On the other hand we have a minor population of hard of hearing and deaf people who are not a part of the Sign language family and the Deaf Culture. They prefer to be more closely associated with the hearing community as they have been brought up orally.

The Hard of Hearning and some deaf people are very comfortable using hearing aids and getting Cochlear Implants as they believe this to be the right choice for them. These hard of hearing / deaf people do not use Sign Language. They are more comfortable being oral.

However not all deaf people have benefited from improvised technology. Deaf who use Sign language from an early age are more intellectually developed and are leading by far a very happy and Normal life. It is a matter of personal choice of using or not using sign language and being a part of the deaf community.