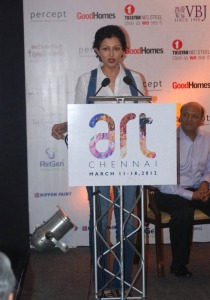 If you had always been interested in knowing a wee bit more about modern and contemporary art, all you have to do is to go to the beach, a shopping mall or even a local MRTS station sometime between March 10 and 18.

The second edition of Art Chennai 2012 has decided to take art to the common man by displaying works in public places.

The fair, which will have the support of the state government and the Confederation of Indian Industry (CII), is being touted as south India’s biggest art ensemble and aims to strike a chord with all strata of the society.

“That is why we have to let in restaurants, non-galleries and lifestyle spaces this year apart from the 30-odd galleries,” said Sanjay Tulsyan of the Art Chennai team.

Large sculptures will be erected in Ascendas IT Park, Express Mall and Marina Beach, while huge posters on the theme of Chennai will be put up across the five MRTS stations in the city. About 200 photographers are reported to be working on 16 themes.

“Such inclusivity will improve art appreciation,” said Pradipta K. Mohapatra, a board member of Art Chennai, who expects a fourfold increase in footfall from last year’s 10,000.

“To include students, there is also a plan to give an Australian curatorship scholarship for two of their best works,” he said.

“The art business in India is growing at the rate of 15 per cent annually with the art, culture and tourism industry fast turning into a volumes game,” said the CII official.