← Indian Railways: Carry Your Proof of Identity While Travelling in Train Effective February 15
Chennai will soon have a Common Ticket System for Local Buses and Suburban Trains → 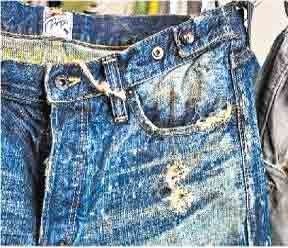 A new type of denims may soon become the new rage in the fashion world. The traditional khadi, introduced by our Father of our Nation–Mahatma Gandhi–has been reintroduced as Khadi Denim in to the main stream fashion market by the Rajkot-based Saurashtra Rachnatmak Samiti (SRS) eight months back, which has proved to be successful in the country.Now the leading Denim manufacturer Arvind Limited are planning to market the khadi Denim across the world. Khadi denim is a hand-spun and hand-woven Cotton fabric with 12-count twisted thread.

The traditional khadi popularised by the Father of the Nation, Mahatma Gandhi, has been reinvented in the form of ‘khadi-denim’ with a view to boost sales in today’s competitive market flooded with national and international apparel brands. Rajkot-based Saurashtra Rachnatmak Samiti (SRS) introduced khadi-denim in the market about eight months back, which is now proving to be a hit.

Gandhi used khadi as a tool to fight against the British rule and made the khadi-producing ‘charkha’ a symbol of the Indian non-violent freedom movement. He promoted khadi as a means of self-employment for people, that was ultimately aimed at reviving the villages. On Gandhi’s call, Indian people renounced Britain-imported cloth to take up khadi, bankrupting Manchester in the process.

However, after witnessing khadi sales dwindling over the past few years, SRS decided to give a modern touch to the traditional cloth to revive it.

“Year-by-year, the sale of khadi has been decreasing and more and more people associated with the khadi industry leave the profession,” SRS Chairman Davendra Desai said.

“This made us think about how to arrest the decline in sale and save the livelihood of the people. We decided to give khadi more of a modern and 21st century make-over by producing designer dress, shirts and denim-khadi, instead of only the traditional kurta-pyjamas,” Desai said. “Out of all these products, denim-khadi has been a hit in sales at all our outlets in Gujarat. Now, the biggest denim player in the market, Arvind Mills, has contacted us for mass-scale production of khadi-denims,” he said.

“Arvind has asked for about 20,000 meters of khadi denim per month. But as there is a manpower constraint at present, initially we would supply 5,000 meters. The supplies starts from ‘Labh Panchami’, which over a period of time would increase to 20,000 meters per month. ” Devendra Desai, president of SRS.

According to source, SRS started supplying khadi denim from October 31 to Aravind mills.

A pair of jeans made of this versatile fabric is set to cost Rs 10,000, making it one of the most expensive jeans. Khadi denim will not be machine-made but hand-woven on a charkha, thus employing heavy manpower. This is seen as a major contributing factor to the steep price of this fabric.

← Indian Railways: Carry Your Proof of Identity While Travelling in Train Effective February 15
Chennai will soon have a Common Ticket System for Local Buses and Suburban Trains →