Yoga Room in San Francisco International Airport, Are we lagging behind?

Yoga initiated in India by our ancient saints and sadhus has found its place in the western countries. It is well appreciated and given its place with many of our spiritual masters setting up centers abroad.  If you are travelling to Northern California, you can now find inner calm in the Yoga Room (studio) at San Francisco International Airport.  Very interesting but are we giving the discipline of yoga its due?

While it’s not quite a mountaintop in Tibet, airport officials say the low lights, and soothing blue walls aim to afford travelers, stressed 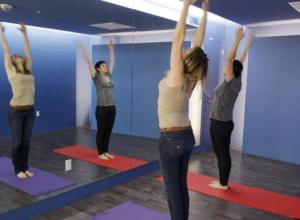 out or sanguine, an oasis of calm in which to flex, twist and decompress. “Silence is appreciated,” says a sign spelling out “Yoga Room Etiquette.” A prominent blue-and-white sign with a Buddha-like pictogram beckons visitors: “Come check out our Yoga Room.”

The architects, Gensler Design, set the lights low and warm in contrast to the light, bright concourse, according to a statement, and a floating wall was constructed to symbolize ‘a buoyant spirit and enlightened mind. ‘

The room, open to all ticketed passengers, contains a few chairs and yoga mats but no instructors or televisions. No shoes, food, drinks or cell phones are allowed.

The Yoga Room is just the latest example of how airports are trying to improve the passenger experience and showcase their regional culture, noting the ancient practice’s popularity in the San Francisco Bay area, said Debby McElroy, executive vice president of Airports Council International-North America.