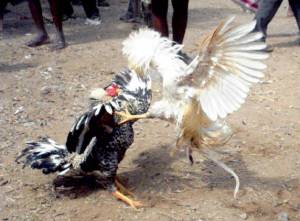 Pongal celebrations in this part of Tamil Nadu are not complete unless the traditional, cock fighting competitions are conducted.As with every year, over 50,000 cocks participated in a four-day gala that took place at Poolamavlau and Koviloor, near Aravakurichi, here where several fighter cock trainers from across the country, including a handful from north Indian states, came down to participate in the prestigious event.

“Cock fighting is more than a tradition here. The villagers consider it a sign of prosperity. If our cocks die during the fight, it is generally considered that some ill will befall the family in the coming year. If we win, then it will be a great year,” says Thadakoil K. Selvam, 47, a traditional breeder of fighter cocks.

Since he was 12 years old, Selvam has been raising fighter cocks and has been participating in cock fights. “We take very good care of our fighter cocks, feeding them a special diet that comprises pulses, grains and other combinations to strengthen their muscles.

All cock fighters take their cocks to a vet every week and ensure that they are in the pink of health,” he says.

Cock fighters also provide special training to the birds. “We dip them in water to teach the animal to be fearless and train it with exercises to strengthen its muscles and enhance its rage,” another trainer of fighter cocks said.

While each fight could last anywhere between five minutes up to an hour, the tradition has been that the owner of the winning bird takes possession of the cock that lost the fight.

“There is a great demand for the meat of fighter cocks as it is nutritious and very different from regular chicken,” a participant said.