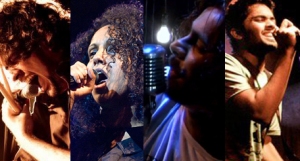 Chennai’s first ever Global Music Festival is set to begin today. The festival will feature 24 acts spread over three days. It will feature  genres that range from electronica to pop, Indian classical fusion to R&B, jazz to Tamil Folk and Sufi and of course, good ol’ rock ‘n’ roll.

Chennai has been cribbing for years that not enough international acts grace its shores; that only Mumbai, Delhi and Bangalore get the cream of musical pickings. The Prodigy, Metallica, Imogen Heap, and even Bryan Adams, bypassed the city during their tours. However, this trend is about to change as the city welcomes the Chennai Global Music Festival.

The event will take place on the grounds of the biggest mall in the city, Express Avenue, across three days, and will have performances from 24 international and local artists. The range of genres at the festival range from rock, electro-pop, grunge and hip hop to fusion, folk, jazz, blues, and country. The lineup features local Chennai acts like ‘Folk You’ rockers Junkyard Groove (check out our review of their gig at Mood Indigo here), fledgling rock/blues band Grey Shack, indie-rockers Adam & The Fish Eyed Poets, jazz/funk band Groove #3, and grunge band Null Friction (interesting titbit about this Chennai trio – their gig at 1pm on January 15 is a reunion gig, their first performance together since 2010. They plan to put out an EP in March).

Chennai will also welcome an array of artists from across the globe including France, Sweden, Reunion Islands, USA, and Malaysia along with collaborations with seasoned musicians from Chennai, Bengal, and Rajasthan.

The festival is the brainchild and the efforts of festival director, Eddie Prithiviraj of event and artist management company Exodus, along with Sujit D’Souza, founder of Lemontree media.

Prithiviraj tells us about what he hopes for the Chennai event

“This event is something that we’ve been planning for a year.” He recalls, “I got a taste of some of the music festivals in Europe last year and that was definitely inspiring.” Asked whether the festival was meant to coincide with the end of the Margazhi season, he says that it worked out simply as a coincidence. “There were a lot of discussions as to when to fix the dates and this season seemed just right.  We’ve skipped the rains, it isn’t too hot and people are back from their holidays. So, many are bound to be in town. At the festival the lineup is good, there are huge names that are coming over. The whole point is creating a future, the future of what the festival is going to carry, that is 2013, which I am already planning for.

Chennai has great potential for musicians, and though the city is a little conservative and they may not venture out much, unless something is happening in Bangalore and then they venture out (laughs)… What I’m trying to do is bring in a real festival with the maximum we have got for Chennai.”

Due to the diversity of musicians from all over the world, there will be a two stage set up arrangement at all times. So, while one band is playing their encore, another can finish their sound check well in advance to prevent any delays.

The Express Grounds, next to Express Avenue, Royapettah.