Tamilnadu has  a number of folk dances.

Let me describe about all these dances…

Kaliattam is a dance related to goddess KALI. Artist do the make-up like kali and kill the devil(Mahesh or Satan). There are 2 types of performance in the Kaliyattam. one is Pacha Kali(Kali with Green color) and Pavala Kali(Kali with pavalam(red) color) another one is Siva Kaliyattam(Sivan and Kali competition dance).

Karagam is a folk dance with musical accompaniment, performed balancing a pot on the head. Traditionally, this dance was performed 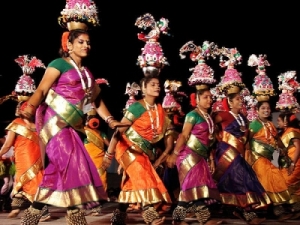 by the villagers in praise of the rain goddess Mari Amman and river goddess, Gangai Amman, performed with literature with water pots balanced on their heads. Karagams were once performed for mulaipari ceremony when the dancer carried a pot of sprouted grains on his/her head and danced, balancing it through intricate steps and body/arm movements. Today, the pots have transformed from mud pots to bronze ware and even stainless steel in modern times. The pots are decorated with a cone of flower arrangements, topped by a paper parrot. The parrot rotates as the dancer swings along. This dance is very popular all over Tamilnadu, though its birth place is said to be Thanjavur. Most artistes hail from Thanjavur, Pudukottai, Ramanathapuram, Madurai, Tirunelveli, Pattukottai and Salem. This dance is danced by an individual or two persons. Both male and female performers participate in this. Acrobatics similar to circus are included – such as dancing on a rolling block of wood, up and down a ladder, threading a needle while bending backwards and so on.

The ancient Tamils when they went on pilgrimage, carried the offerings to the gods tied on the either end of the long stick, which was balanced on the shoulders. In order to lessen the boredom of the long travel they used to sing and dance about the gods. Kavadi Aattam has its origin in this practice. Special songs were created to be sung while carrying the Kavadi Sindhu. This dance is performed only by men. It is done by balancing a pole with pots fixed on either end, filled with milk or coconut water. The poles are made from Purasai or Teak wood. On top, bamboo strips are bent like a half-moon, covered with saffron cloth and further decorated on the sides with peacock feathers. This is mainly a religious dance, performed in worship of Lord Murugan, the second son of Siva. The dance is accompanied by Pambai and Naiyandi Melam.

Oyil means beauty. This dance is hence the dance of beauty. Traditionally, it is danced only by men. Ten years ago women also began 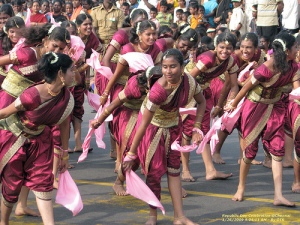 to participate. This dance is prevalent in the south districts and Kongu Nadu in particular. First a few people will stand in a row and start dancing with rhythmic steps with musical accompaniment. Intricate steps are used in martial arts, such as Silambattam. Then gradually the row will become longer as the new comers and guests all join and dance along as they like. The dancers wear ankle-bells. Normally, the dance is performed with the accomplishment of musical instruments and songs. It is performed near the temples or public places in the morning and evening hours, at times even till midnight. Styles of Oyilattam differ from place to place. Devarattam :
Devarattam is a pure folk dance still preserved by the descendents of Veerapandiya Kattabomman dynasty at Kodangipatti of Madurai District. It was actually performed once a year near the temple and that too restricted to that community alone. Folklore research scholars have found that Devarattam is a combination of ancient ‘muntherkuruvai’ and ‘pintherkuruvai’ of the ancient Tamil Kings. It was performed in front of and at the chariot on the victorious return of the King and his army from battle field. Sometimes even the king and his marshalls would dance on the chariot deck. The soldiers and female dancers would form in lines and dance behind the chariot. 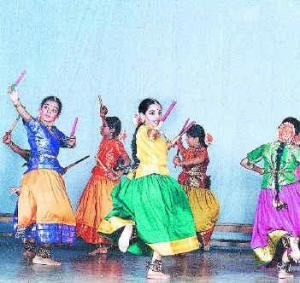 Kolaattam is an ancient village art. This is mentioned in Kanchipuram as ‘Cheivaikiyar Kolattam’, which proves its antiquity. This is  performed by women only, with two sticks held in each hand, beaten to make a rhythmic noise. Pinnal Kolaattam is danced with ropes which the women hold in their hands, the other of which are tied to a tall pole. With planned steps, the women skip over each other, which forms intricate lace-like patterns in the ropes. As coloured ropes are used, this lace looks extremely attractive. Again, they unravel this lace reversing the dance steps. This is performed for ten days, starting with the Amavasi or Newmoon night after Deepavali.

This dance is performed in temples during Amman festivals or Navaratri festival. The dancers wear ankle-bells and hold anklets or silambu in their hands, which make noise when shaken. They perform various stepping styles jumps. The dance is in praise of all female deities, the most preferred being the powerful angry goddess – Kali or Durga.

This is the Dummy Horse Dance where the dancer bears the dummi figure of a horse’s body on his/her hips. This is made of light- 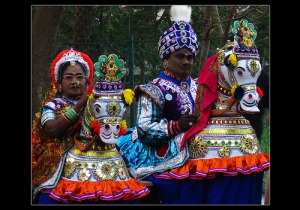 weighted materials and the cloth at the sides’ swings to and fro covering the legs of the dancer. The dancer dons wooden legs which sound like the hooves of the horse. The dancer brandishes either a sword or a whip. This folk dance needs much training and skill. This dance is accompanied by Naiyandi melam or Band music. This is connected to the worship of Ayyanar, prevails manily around Thanjavur.