Fat or No Fat, Ghee Matters

Ganapathy’s Butter and Ghee, is a Mylapore landmark that opened in 1942.

Many Chennai traditionalists buy their butter and ghee 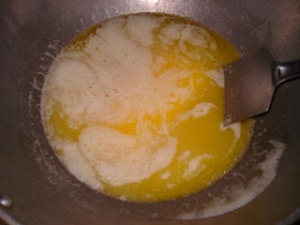 only from here, something most of them have been doing for the last three generations. As the enthusiastic shop boy takes the lid off a comfortingly dented tin to scoop out a creamy pat of white buffalo butter for a customer, G. Sankaran, the owner of the store explains why they stubbornly resist change.

“The butter has been coming from Uthukuli, in Erode district, ever since my father, Ganapathy Pillai, started this business,” he says, adding that they even use the same supplier his father did. Sankaran’s son S. Saravanan adds that the dairy merchant too has been doing the same business since his grandfather’s time, so the flavour doesn’t change.”

The butter is loaded onto the night train at Erode, and reaches Chennai Central Station early in the morning. From here, a part of it is taken to a house in Mylapore, to be made into ghee in a slow laborious process that takes about three hours, while the rest goes to the shop to be sold as butter. Uthukuli is famous for its contented livestock, both cows and buffaloes, which produce rich butter. While most supermarkets stock the yellow cow ghee, Ganapathy’s is famous for its aromatic pale buffalo ghee. Every morning, the store gets about 30 kilos of butter, of which only one fourth is cow butter.

The flavour of the ghee made from the buffalo is better, and the ghee is thicker since its fat content is little higher. According to Ayurvedic doctors, both have their benefits, though cow ghee is supposed to be more nutritious as it has more carotene and vitamins. Buffalo ghee has more protein and calcium, but it also has more fat. However, it can’t be denied that it smells fantastic, which explains why it’s so popular. And, since it’s so powerful, a little goes a long way.