Located in the heart of Chennai, Sparky’s Diner brings the authentic American dining experience to Chennai. Started in 2005 Sparky’s has been drawing a crowd of dedicated foodies hooked to the distinct tastes whipped up by chef Thom Petty.

Of Italian American origin, Thom grew up in California where cuisines from all America mingled amicably. Besides the Italian sauces made at home, he tasted the delicious spicy flavours of Cajun and Mexican food and decided at a young age that there could be no higher calling than to feed people good food.
Thom began career as a restaurateur in Hawaii where he ran floating restaurants aboard luxury ships. Ten years down the line, a sense of adventure beckoned him to Albania where he began a restaurant that became the hub of Tirana, the country’s capital.

Fate then beckoned Thom to India. And the moment he set foot in the sun-soaked southern city of Chennai, Thom knew he had come home. He stayed, he looked around, he saw a need, he started Sparky’s .

Located in Egmore, Sparky’s Diner is barely a kilometer away from the city’s key shopping area of Spencer’s Plaza, Pantheon Road and Montieth Road. It is also 4 km from Central Station and a stone’s throw from local stations at Egmore and Chetpet. 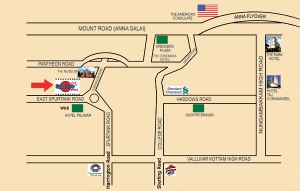