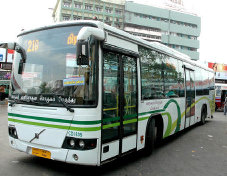 The Metropolitan Transport Corporation on Tuesday launched air-conditioned mini bus services from Chennai Airport to Egmore Railway station and Anna Nagar West. Two shuttle services each on both the routes will ply from morning till midnight.

However, these mini buses meet the BS 3 norms despite the Centre’s order to operate only vehicles complying with BS-4 norms in major cities to help reduce pollution levels. Officials, nevertheless, clarified that the service does not fall under the long-pending mini bus plan for the city.

“The 16-seater Ashok Leyland buses were purchased from Villupuram Transport Corporation, which decided to sell them as there was a dearth of passengers. The buses have GPS facility, which helps in monitoring the movement of the vehicles from the head quarters. They also have automated doors and separate luggage space,” MTC officials told DC on Tuesday. The service to Egmore would ply through Guindy, Anna University, Madhya Kailash, Adyar, Mandaiveli, Adyar Gate Hotel, Cathedral Road, Anna Salai, and Connemara Hotel, while the service to Anna Nagar will stop at Kathipara Bridge, Kasi Theatre, Udhayam Theatre, Ashok Pillar, Vadapalani Police Station, CMBT, Thirumangalam and Anna Nagar West.

Flat ticket rates of Rs 150 and Rs 100 have been fixed for Egmore and Anna Nagar, respectively. The buses will be operated to Egmore at one hour intervals from 6 am to 11.30 pm and from 7.05 am to 12.35 am in the return direction. Buses will leave the airport for Anna Nagar from 6.35 am to 11.45 pm at one-hour intervals and from 5.30 am to 10.40 pm in the opposite direction. The services didn’t get much response on the first day, as commuters were not aware of the scheme.